To what extent is the German past really past? 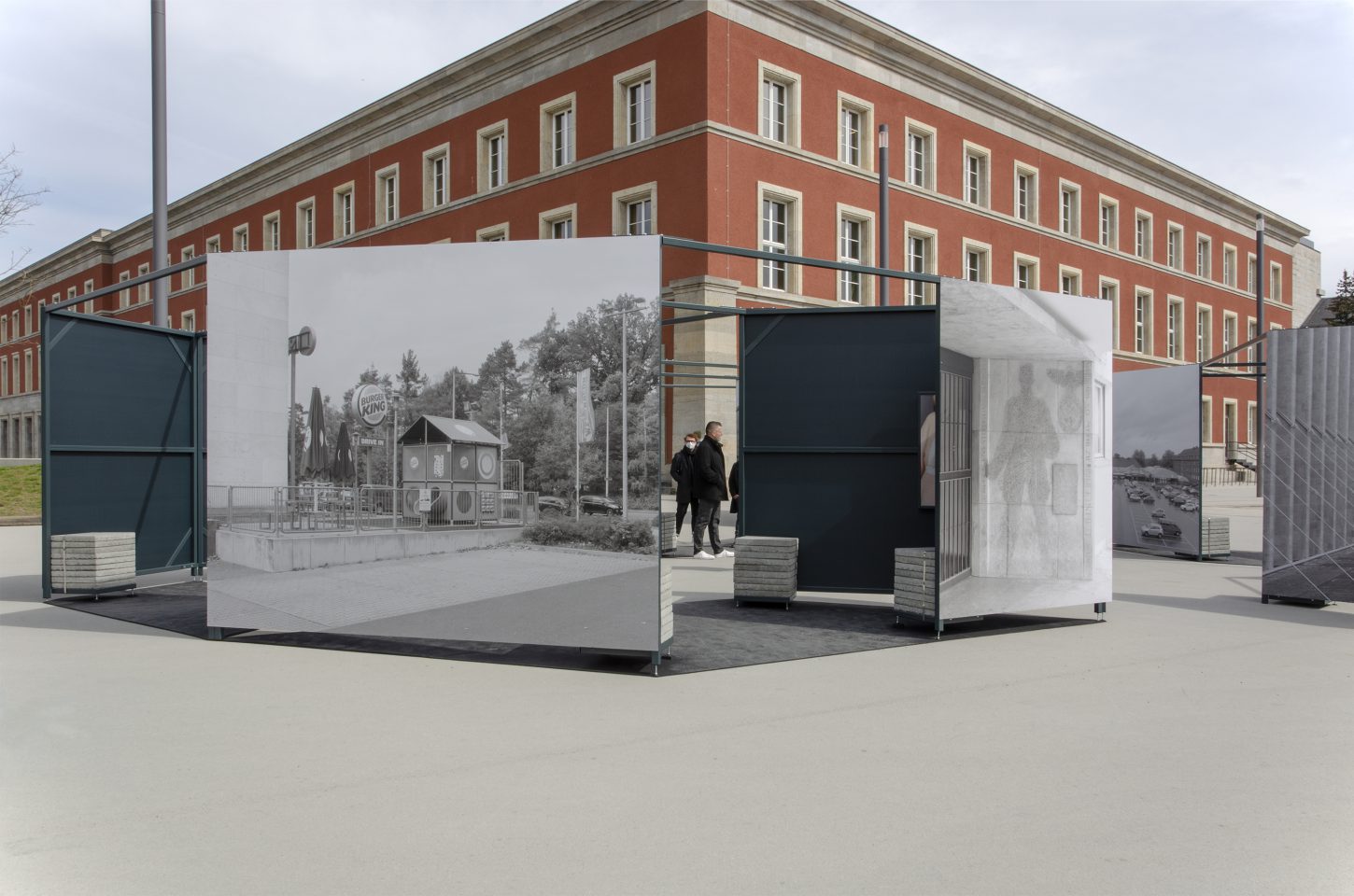 ‘Haut Stein’ focusses on national socialist symbology which remains visible to this day. It interrogates persistence, use, and obliteration of these signs in two distinct formats: as the structural ornaments and architecture through which the symbols of national socialism linger in public space; and as tattoos, by which the same signs serve to reaffirm an individual’s commitment to right-wing extremism.

Former neo-nazis are portrayed in the process of departing from their precious identities as right-wing extremists. The photographs show tattoo removals or cover-ups, as symbol that for years expressed an identity and a political world view disappear slowly. The erasure of signs inscribed into the skin is a very deliberate step for those leaving; it is costly, lengthy and painful.

Meanwhile, monogram photographs depict historical and as symbols which remain visible at numerous outdoor locations. Despite the process of de-nazification and attempts at removal, these signs or their traces remain visible in a range of locations, on houses, in decorative bands and in facades. Ganslmeier’s images reveal those fragments as well as examine their wider spatial context in villages, streets and settlements. By situating these individual stories into a social-political context, this work poses the question: to what extent is the German past really past. 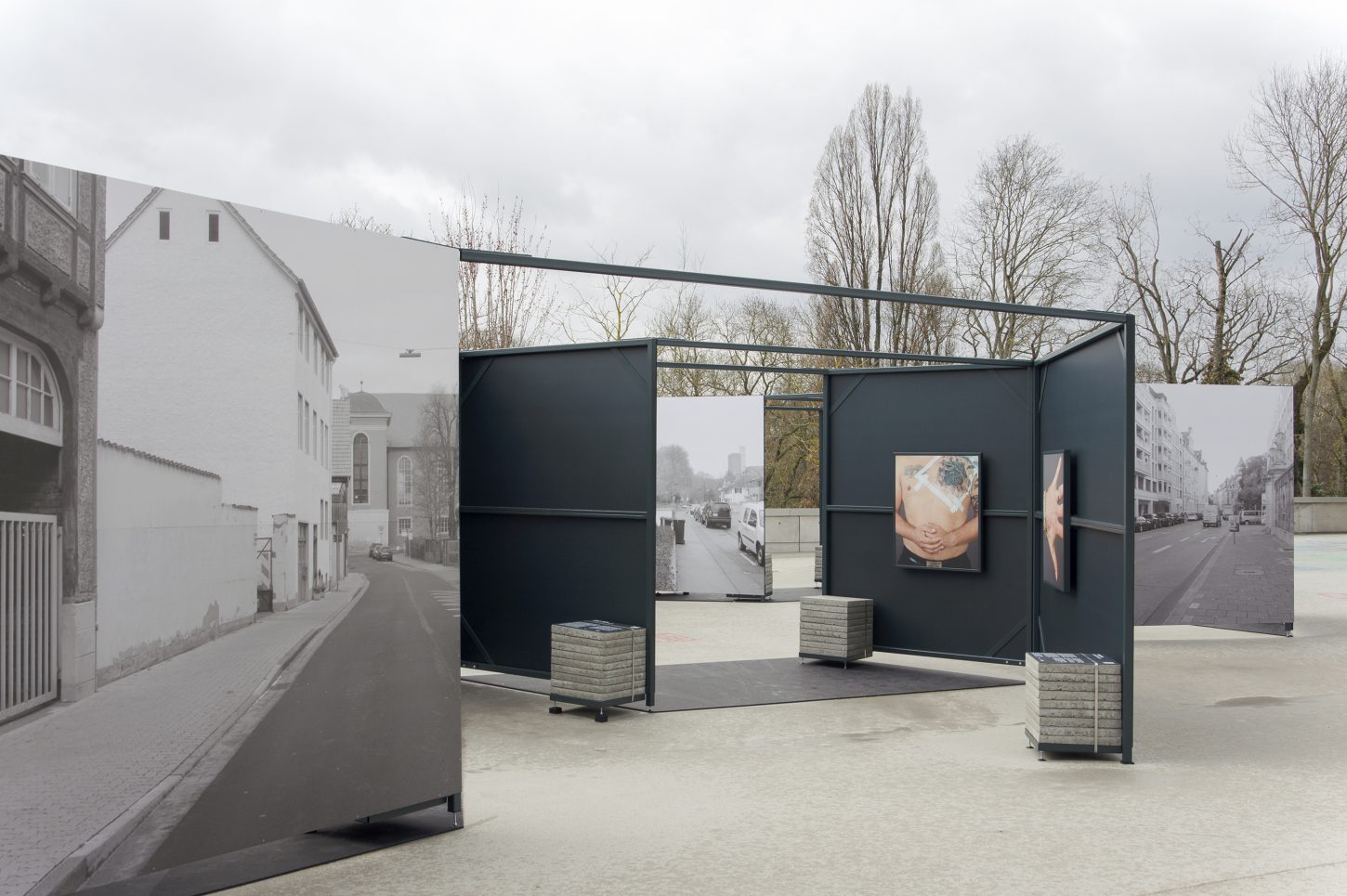 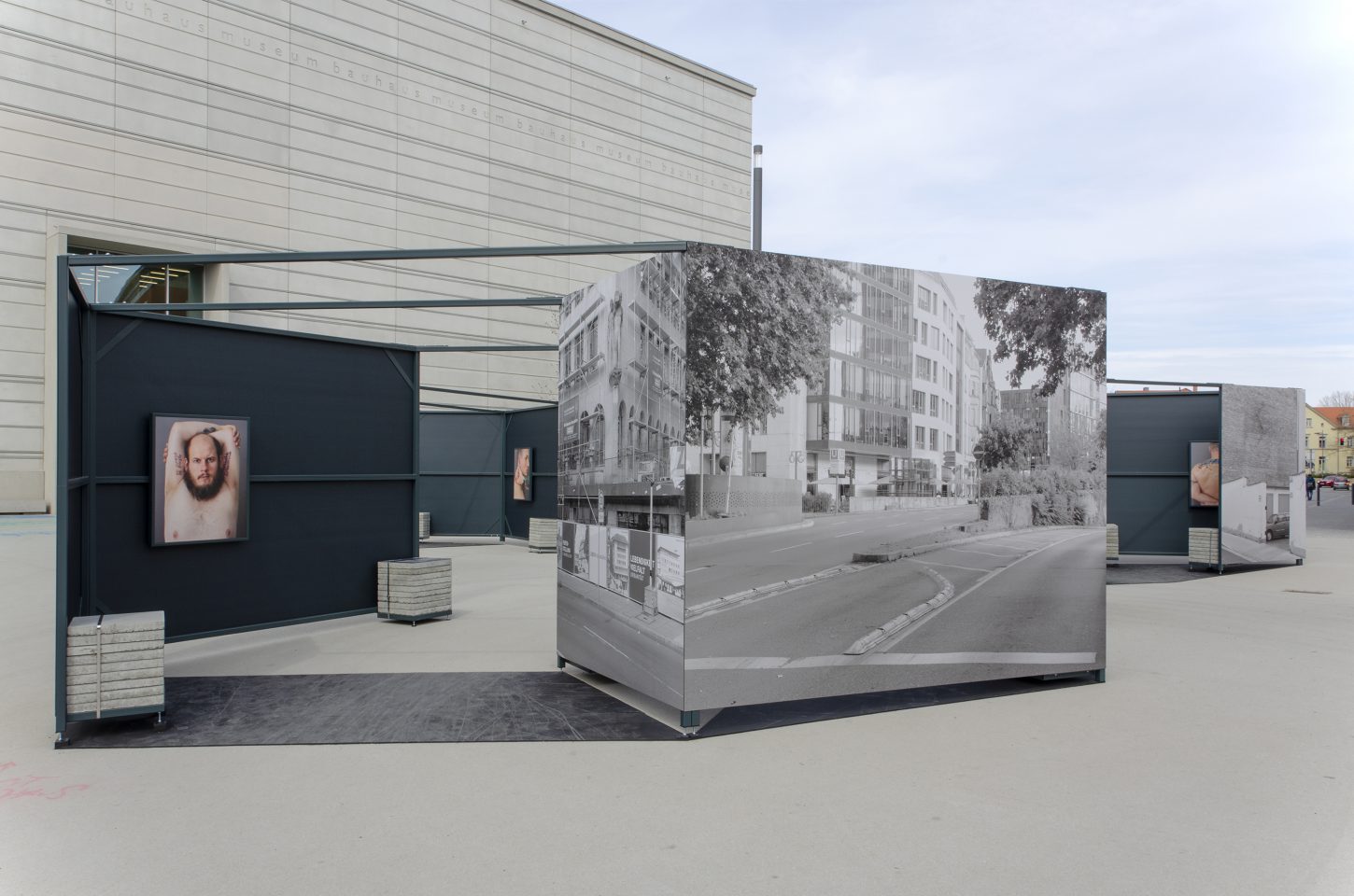 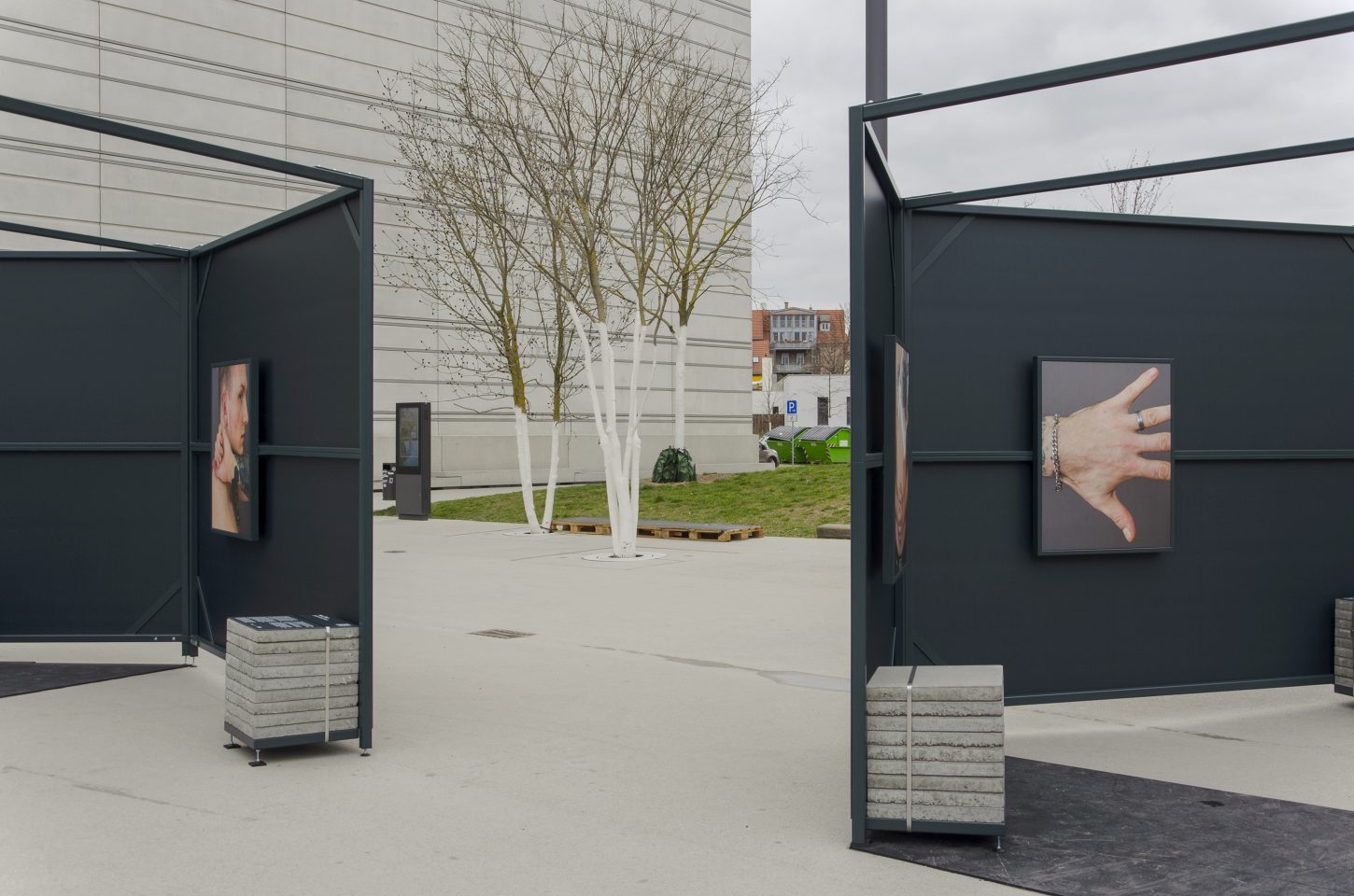 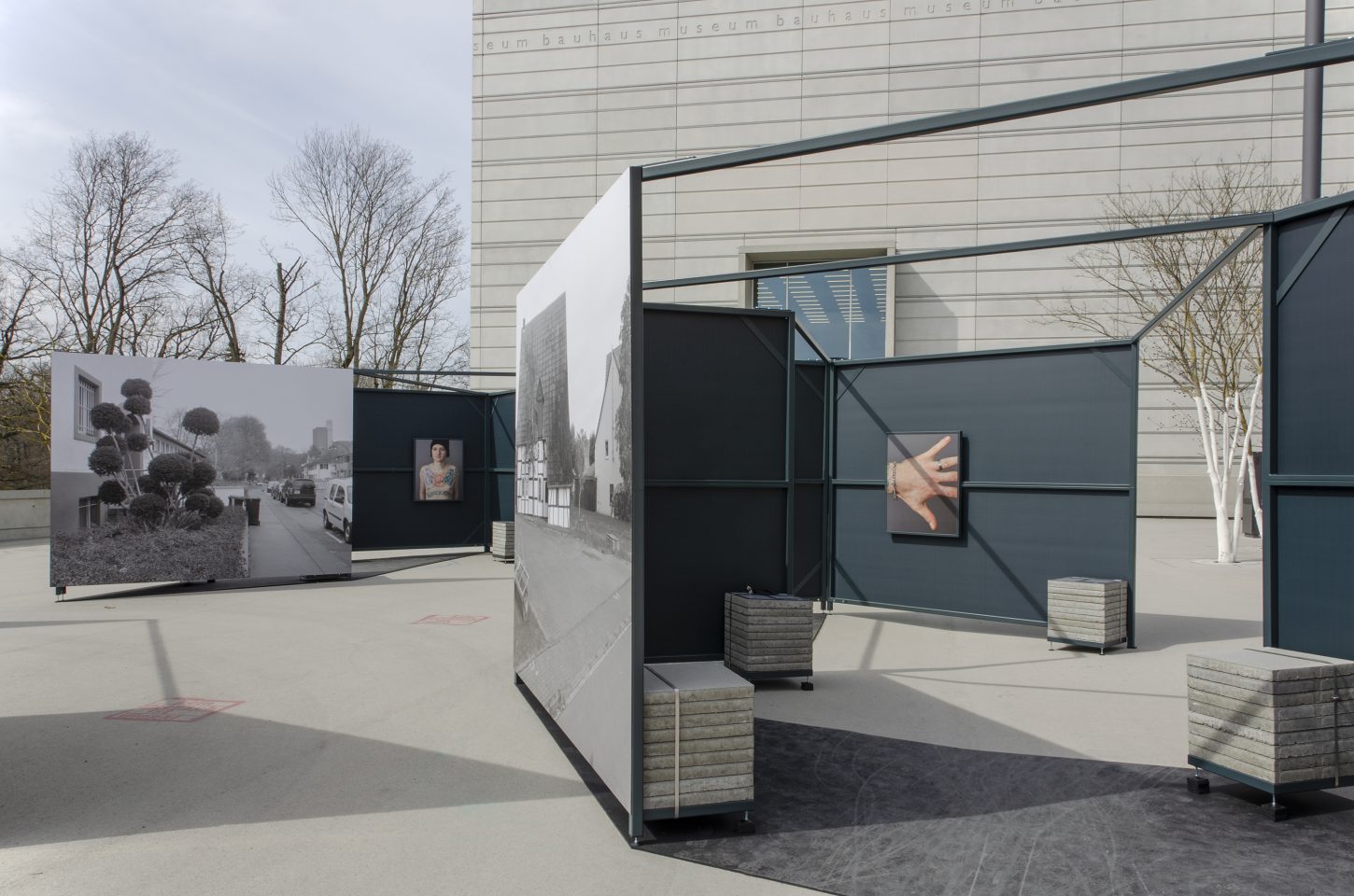 ‘Haut, Stein’ by Jakob Ganslmeier forms a very relevant contemporary visual document, both historically and in the political context of the here and now. The project is both narratively and visually impressive and at the same time it dares to be truly vulnerable.

‘Haut, Stein’ focusses on national socialist symbology which remains visible to this day. It interrogates persistence, use, and obliteration of these signs in two distinct formats: as the structural ornaments and architecture through which the symbols of national socialism linger in public space; and as tattoos, by which the same signs serve to reaffirm an individual’s commitment to right-wing extremism.

Monochrome photography shows historical Nazi symbols being integrated in architectures and therefore having a presence in the public space. Despite the so-called denazification, overpaintings or other interventions they are still visible and therefore part of the everyday in cities and on the countryside.

The photos of these architectures and their peculiar historical inscriptions are conceived as diptychs. One shot always shows close ups on the symbols that are three dimensional parts of buildings, incorporated in wall paintings and facades. A second photo presents some sort of establishing shot that allows to understand the contexts (and the strange normality of the existence of these Nazi symbols in the public roam).

The colour photos focus on the documentation of the removal of – in some instances – extensive tattoos depicting right-wing symbols and signs. I capture the process as the physical inscriptions disappear, which up to this point, have for years been an expression of one’s identity and political ideology. To remove symbols so fused into the body is a highly deliberate step for an ex-Neo-Nazi, because the elimination of these distinctive marks is an expensive, lengthy and painful process. The process of individuals breaking-away from the right-extremism scene is captured in photographic portraits that trace the renunciation of an ideologically charged environment, both individual and communitarian, via the removal of white supremacist tattoos.

The portraits of former Neo-Nazis will be a means to visualize how the break from the scene has been performed and completed in a visible way. Tattoo removal expresses a person’s determination and sincerity to quit the scene: The removal of symbols is a symbol in itself. 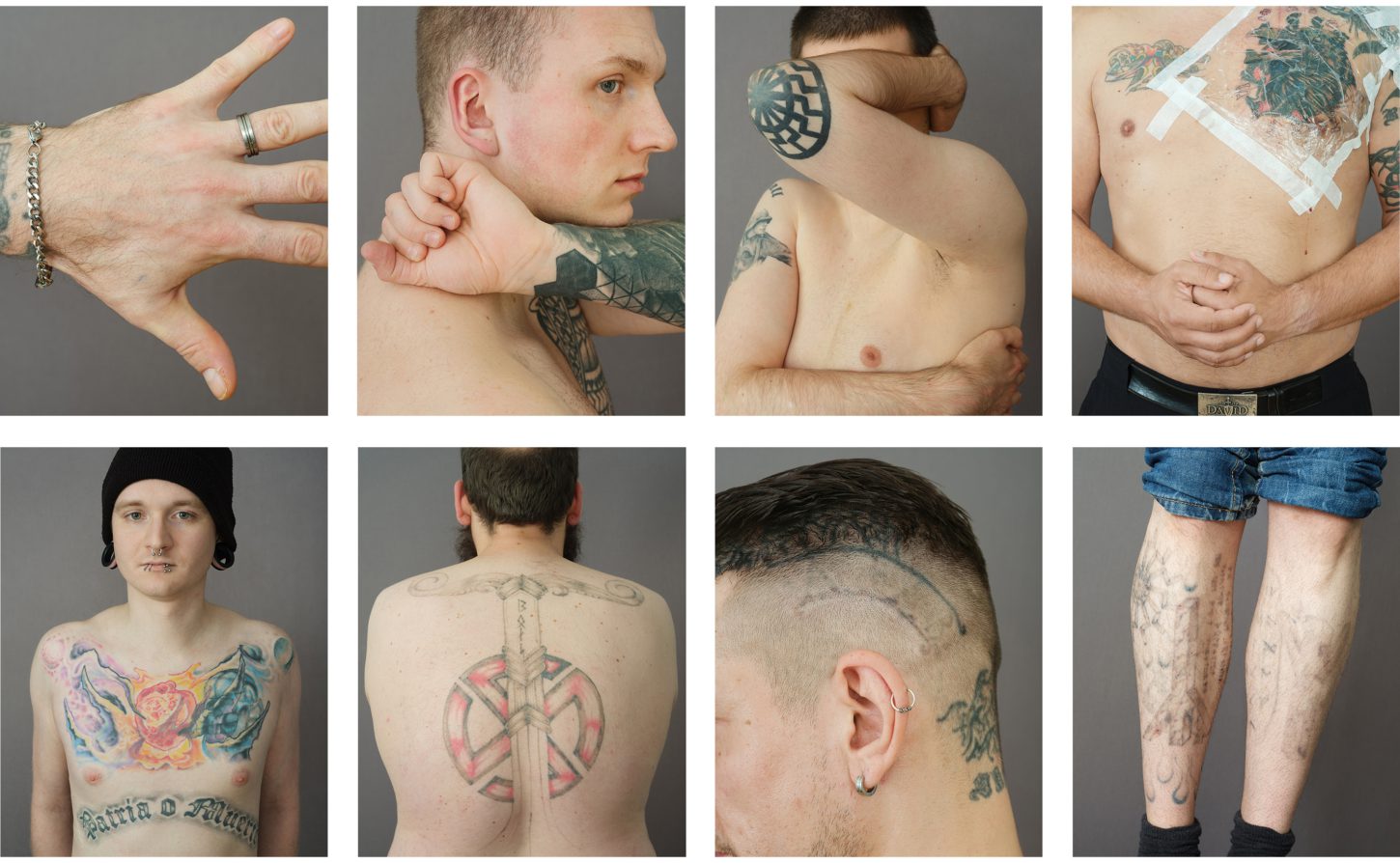 Haut Stein as a spatial installation

Placing ‘Haut, Stein’ as a spatial installation in public space gives the project the opportunity of reaching a larger and more diverse audience, but it also comes with a big responsibility.

The weight and complexity of the subject matter in the project, both historically and in the political context of the here and now, in itself implies  the way visitors need to be engaged in the exhibition installation. It is vital that the narrative and complete story prevail. At the same time, this should avoid that single images or depicted symbols could become isolated visual landmarks.

The exhibition design convincingly stages the impressive impact and monumental quality the images contain. Simultaneously the essential sense of vulnerability and the possibility of a ‘personal encounter’ is accomplished. 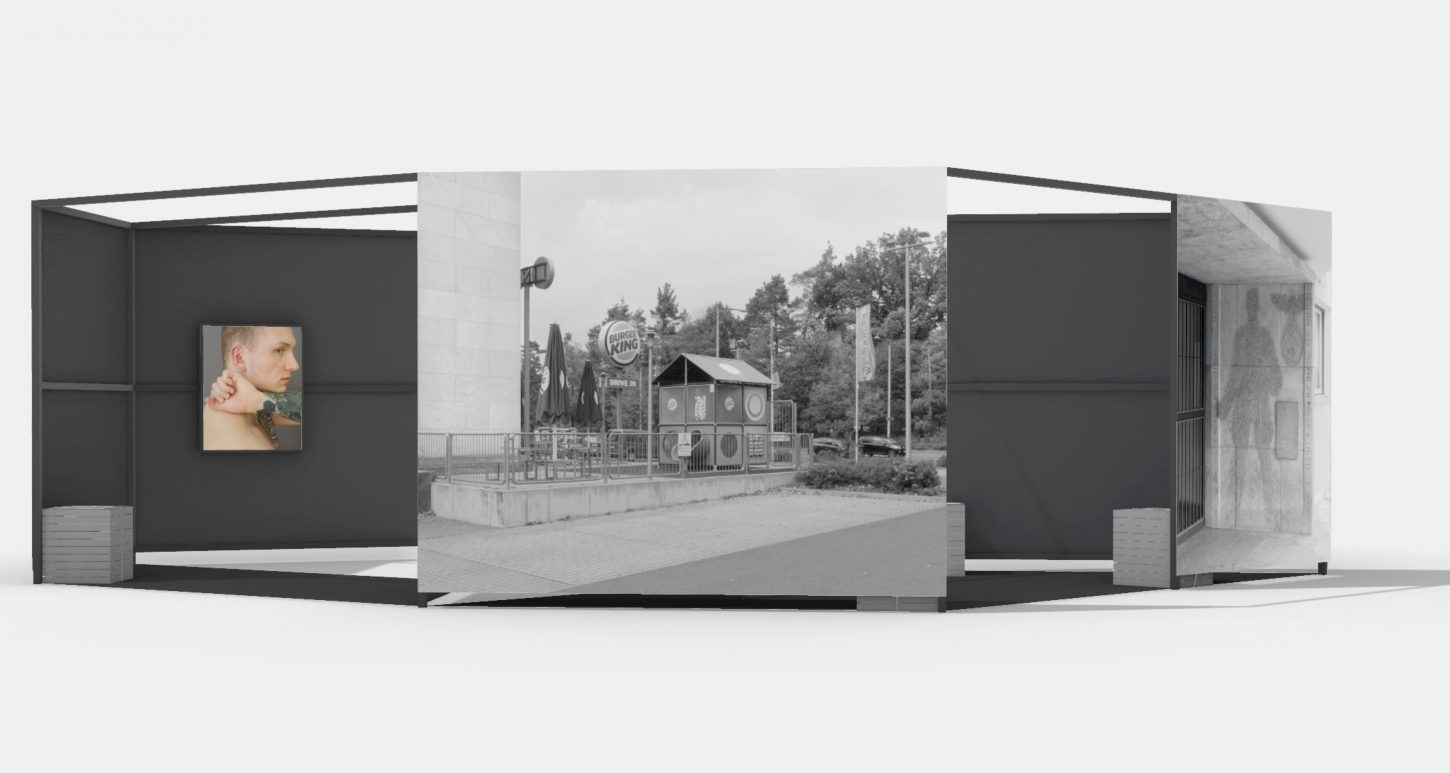 Due to the historical and political layers in the work, K&H developed a method to narrate the project step-by-step. By creating an in- and exterior within the installation the project unravels itself as the visitors get closer.

The installation consists of three identical spatial modules. The exterior of each module shows the monochrome diptychs of the ‘Stein’ part of the work. The proportions of the exterior frame and panels are 1:1 based on the ratio cut of the photography and each L-shaped element contains a portait and landscape sized frame to house each dyptich.

By placing these images in a large format on the outside, of the contsruction, this part of the project is the first part to be encountered. Furthermore, this placement makes the images function as a mirror of the surrounding public space. 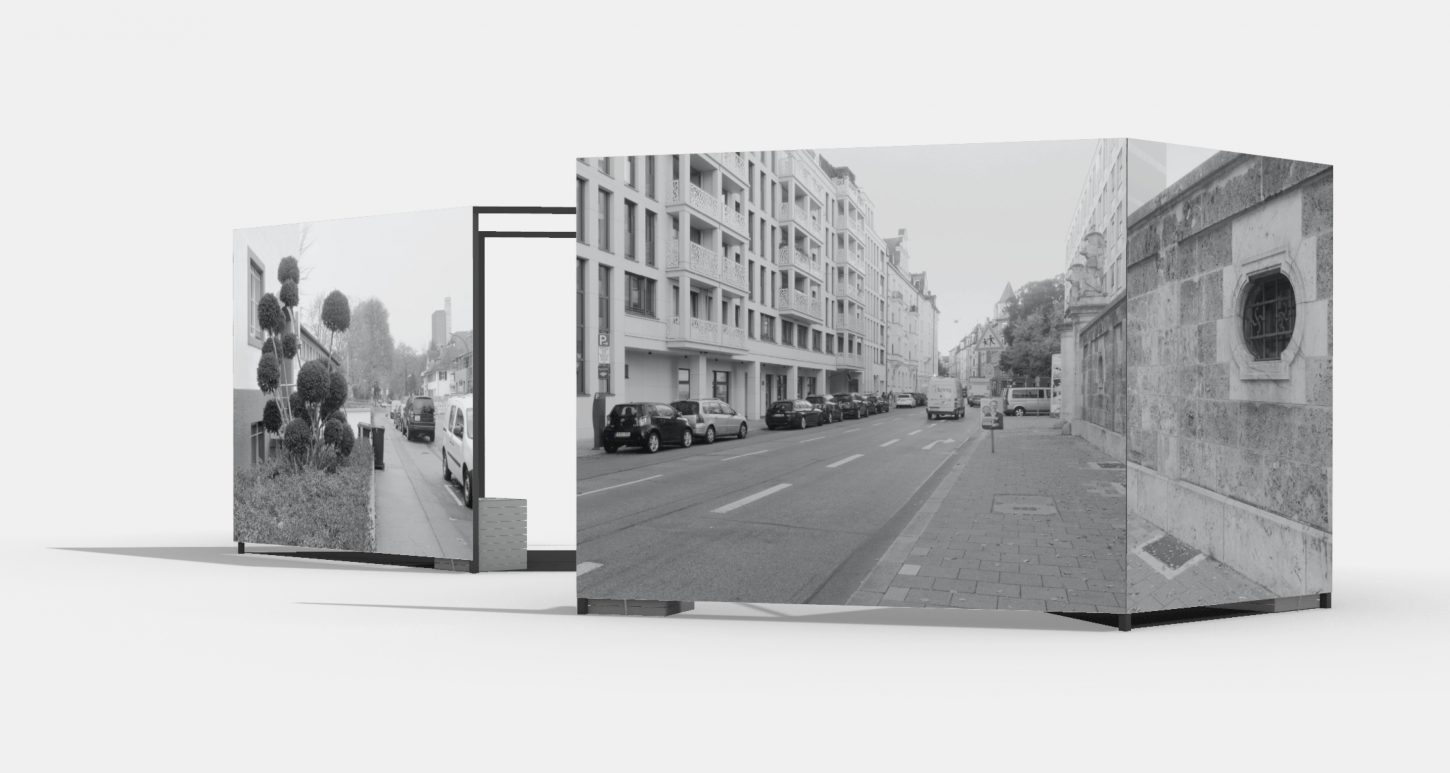 The interior of each module is dark grey coloured to provide for a noticable contrast with the outside. Placing a durable dark grey flooring further emphasizes this notion. This interior part of the modules houses the color portraits from the ‘Haut’ selection. The portraits are placed in floating steel frames which are every specifically placed to make sure the most confronting images are the ones which are the least visible from the outside. 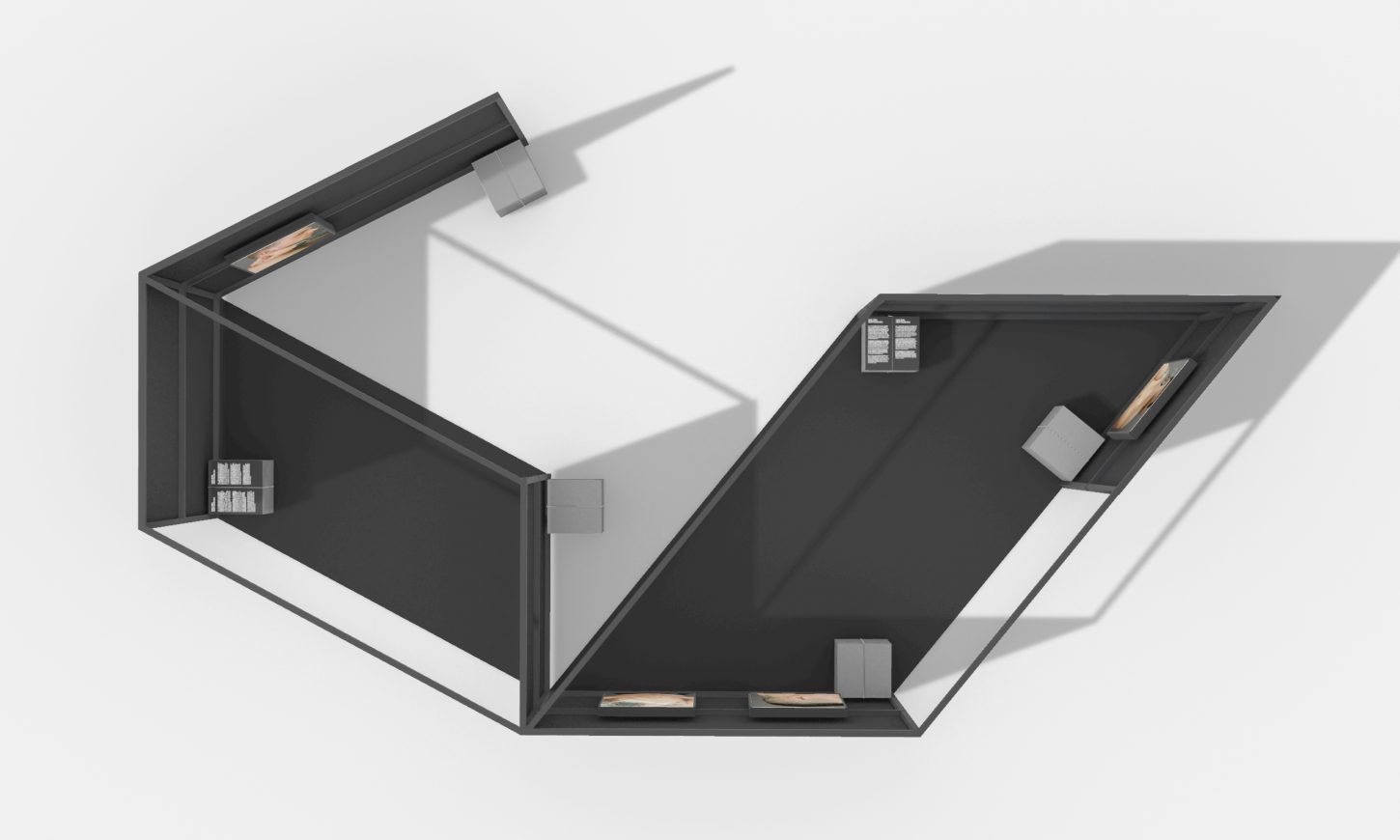 The modules do not need to be fixed in to the location floor. To provide for sufficient wind-ballast simple stacks of secured concrete tiles are connected to the steel construction. Two of these provide a modest information panel in each module.

The structure and placing of its elements is both open and spacious enough to function under current Covid-19 measures. 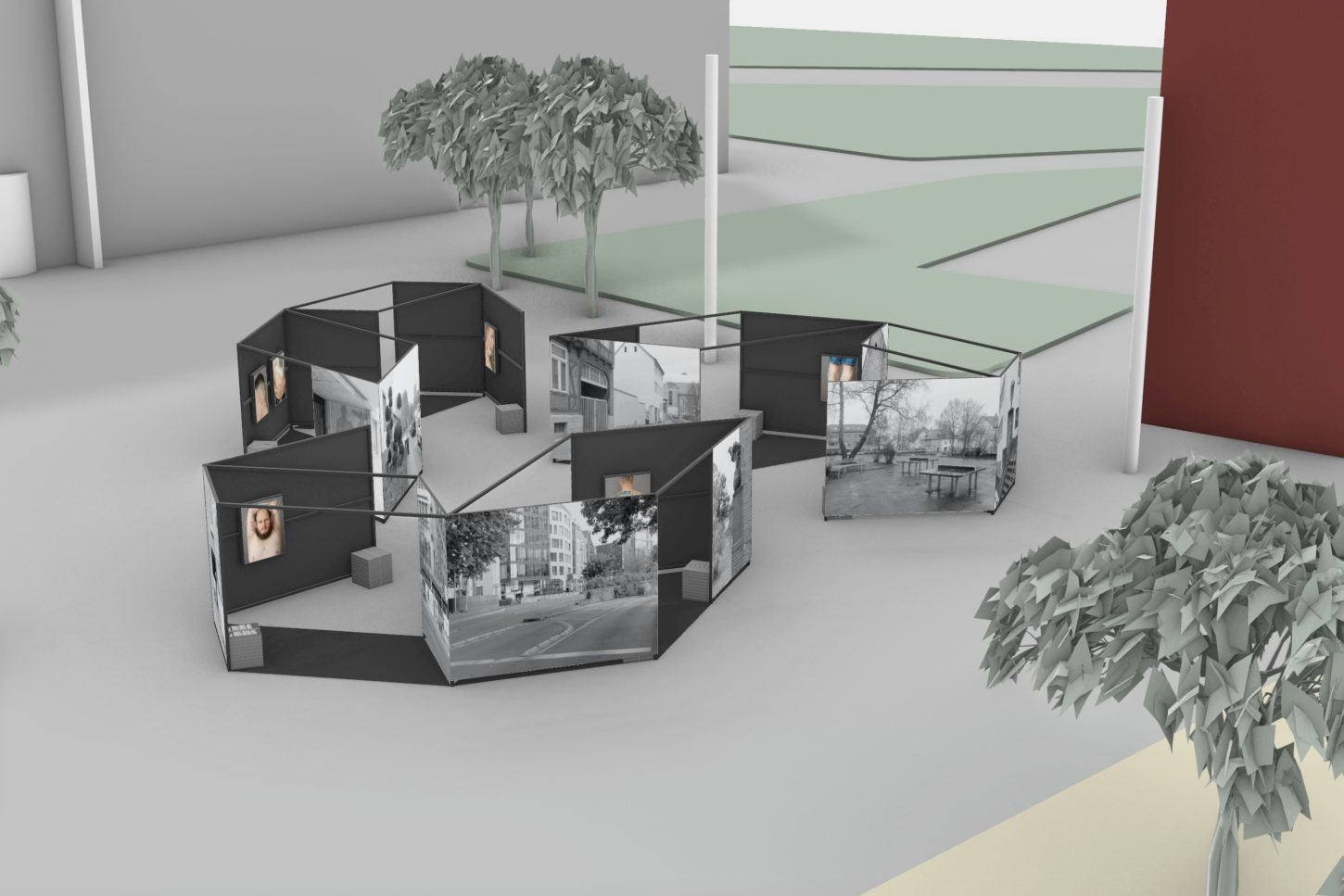